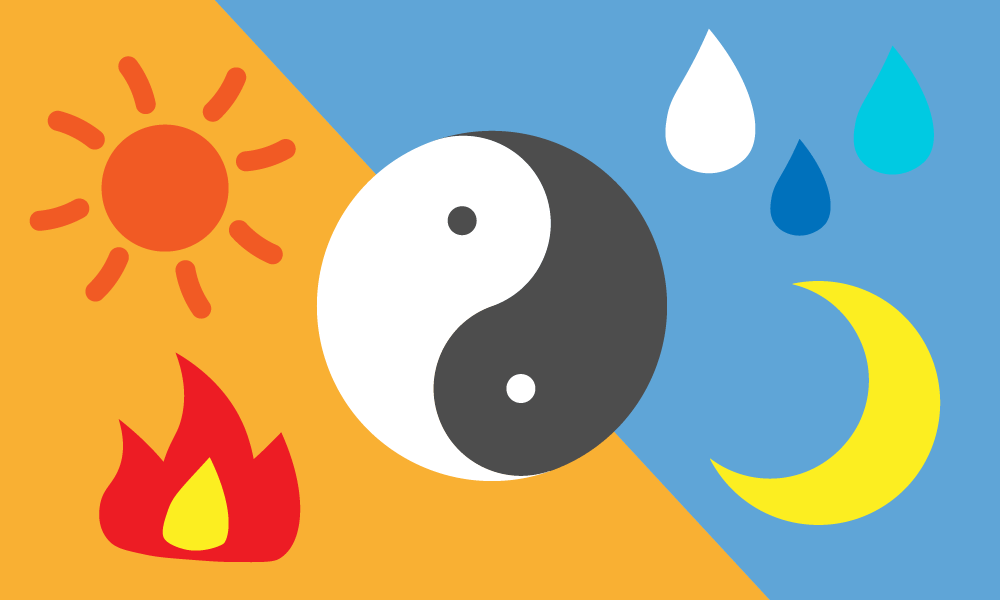 1. Yin and Yang way of thinking

A long time ago, people relied on their five senses to observe the movement and regularity of the sun, moon, and stars, and created "calendar" and "24 solar terms." And on the extension of that, the basic concept of ancient Chinese philosophy called Yin Yang was born.

24 solar terms
In the era when the solar calendar was used based on the phases of the moon, the year was divided into 24 to represent the seasons and climate.
The vernal equinox, summer solstice, autumn equinox, and winter solstice that we often hear even now are the 24 solar terms.

Everything has a front and a back, and everything that exists in nature is divided into "yin" and "yang".
For example, the sun and the moon, day and night, man and woman, top and bottom, fire and water, and exhaling and inhaling, there are conflicting and opposite relationships. However, it is a mutually dependent relationship that cannot exist if either is missing.

2. Four concepts of yin and yang

We think that everything in nature has both sides of mutual and confrontation, and this is called Conflict constraint.
For example, like the moon and the sun, it keeps the balance while constantly moving while confronting the yin and yang. This balanced state of yin and yang is called yin and yang secret.

Yin and Yang of Mutual root mutual use (reliance)

As the sun rises in the morning, the Yang becomes stronger, and in the evening the sun sets, and as soon as the sun disappears, the Yin becomes stronger and the moon appears.
In this way, one disappears and the other appears (prosperity and decay), which separates day and night. One day circulates, and yin and yang are constantly changing, which is called Prosperity and decay equilibrium.

When the amount of yin and yang increases or decreases and changes to another state or something, it is called Mutual conversion.

As mentioned above, in the theory of yin and yang, everything in the natural world can be divided into yin and yang.
Even in traditional Chinese medicine, the symptoms of constitution and illness are divided into "cold body, blue face is yin" and "heat, red face is positive". And the idea of medicinal food is to make a menu using ingredients and Chinese medicine of the opposite nature as a countermeasure.